Somehow it seems to be attractive to make trumpets that have the form of a saxophone. The Jazzophone and the Normaphone are presumably the first ones, dating from the jazz crazy twenties of the last century. But there are more examples, some produced inserie, others built as project horns. 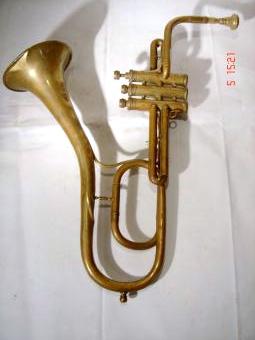 Stated to be made around 1955 in Klingenthal, about 5km from Graslitz on the German side of the border, this instrument was offered on Ebay in 2005.

Above left a sax shaped trumpet with rotary valves. Made by Julius Rudolph in Gotha, Germany, as the engraving says. Probably in the thirties, wenn Gotthard Rudolph was leading the firm.The picture was provided by Johannes Keilwerth who since 1977 operates the workshop. The four pictures to the right are from a similar instrument in the collection of Dieter Grosche, Düsseldorf. No makers name but striking similarities...

And another pretty similar instrument, sold through Auktionshaus Mehlis, branded trompetophon by them and dated 'possibly 1930's.'Again no makers name, but a kind of lyra sign connecting the tube.

Another instrument made by the Rudolph workshop in the 50's or 60's, when it was led by Raimund Thoma. Seems to be alt or tenor trombone rather than a trumpet. 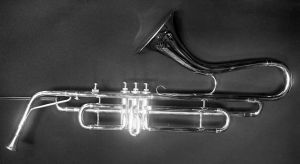 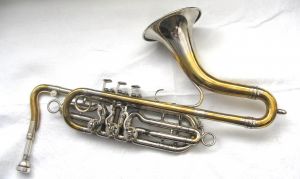 The Trompetenmuseum in Bad Säckingen has another sax-shaped trumpet with 'American style' rotary valves. Their catalog says: "Anonymous. Germany, late 20's or 30's. Related to, but not identical to the Normaphon.' 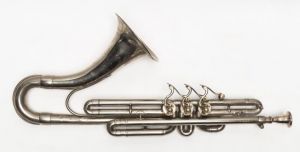 And the Museum of Army Music near London has a similar one (missing the mouthpipe).

The Trompetenmuseum also has a sax-shaped trumpet in low-F (with A=461), from Germany or Austria, around 1925:

Between 1982 and 1986 instrument maker Julius Keilwerth in Nauheim (Germany) build a sax shaped trumpet with one bell, named Toneking 3000. Julius Keilwerth brass instruments are less know than his saxophones. Keilwerth originally worked in Graslitz but moved after the war to Germany. This trumpet was devised by Gerhard Julius Keilwerth, grandson of Julius. He states that there were build no more than 100. Jim Glass bought one from Matt Stoecker. It pops up on Ebay every now and then. There's one in the collection of the Trompetenmuseum in Bad Säckingen, serial number 312600. And the Musik-Museums in Basel (Switzerland) also owns one.

Gary Anderson performed in February 2010 on the Keilwerth Toneking 3000 (from 2.16"). He said the lead pipe comes at an angle that makes pressing it to the lips a challenge.

In the 1980's DEG also build a sax trumpet. Aurelia Hartenberger owns one. DEG was started in 1965 in Lake Geneva, Wisconsin USA, by Donald E. Getzen after he split from the Getzen company in Elkhorn. Few were sold through Ebay in recent years, but I guess the total number differs not much from that of the Keilwerths. They have a bell that's detachable to 'free' the pistons.

In 1994 trumpeter Nargo apparently played on a DEG-trumpet with the Tokyo Ska Paradise Orchestra in Gold Rush, live at NHK TV.

Steve Dillard (Horntrader.com) shows a DEG Classic in this Youtube movie. It has serial number C2255 and was sold to England in 2016.

A Lienbacher saxopete, might have been made by Toni Lienbacher from Berchtesgaden (Germany), somewhere before 1999. Probably a one off. It's nickelplated. A hook and a ring were added by it's owner James B. Degnan to get better control.

British manufacturer of instruments Andy Taylor build another sax shaped trumpet, called Jazzophone. "We built this example because it hadn't been done for years and was a lot of fun. It was primarily used at exhibitions as a conversation piece." Taylor also build a flugel based instrument. 'There was never any commercial intent with them at all', he says. 'The flugel based one was far easier to play due to being able to control how you held it against the chops.' In 2019 he built another two of his Jazzophons.

German instrumentmaker Eddie Veit made a sax shaped trumpet as did Peter Rieblinger from Tandern.

In the nineteens Jupiter in Taiwan built the Excite. Trumpet version R77L and a trombone in F with an additional valve, the VL33L.

Brass wind instrument maker Hub van Laar from Margraten is credited for making this one. It was made around 2003-2004, for a girl that couldn't use her right hand due to a muscle disease. With a trumpet sling she was able to play this instrument. Ditske de Lange at the Technical University Twente in 2004 dedicated her thesis on this subject. 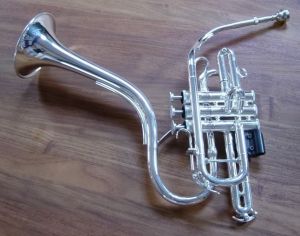 In 2014 this 'Jazzophon' was made by Brassmusic Repair, Modify and Supply Bangkok, Thailand modified this instrument. In October 2016 he dedicated it to the late King Bhumibol.

In 2016 trumpeter Gábor Komlóssy from Budapest made a sax shaped trumpet that he offered to trumpet legend Arturo Sandoval and named the 'Sandophone'.Sandoval appreciated the gift and stated that the instrument gave him other ideas while playing. 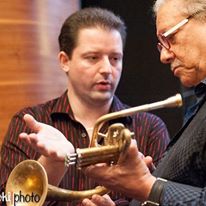 Sandoval plays his new jazzophone and comments on it

Mike Del Quadro from Del Quadro Custom Trumpets in Las Vegas made this normaphone in 2018 for a guy called Timothy Bender, so he named it a Bender-phone. Electroformed copper bell and Getzen valve section. "The shape forces me to use less lip pressure, so maybe it will improve my technique", Timothy is hoping... 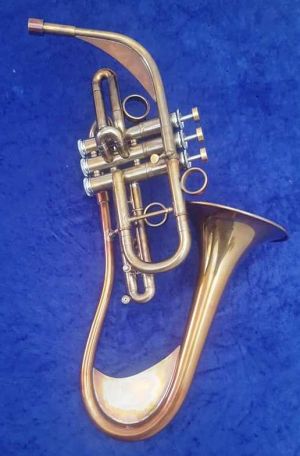 Sean Mason from Factoryville, Pennsylvania, made this double belled, trigger action, saxophone shaped trumpet as his final project at Renton technical college. It was made out of Yamaha trumpet parts and the rotor off of a G bugle. One of the bells is a tuning bell to make sure the bells play in tune with each other. It is currently on display in the band instrument repair classroom at Renton tech. Here Sean demonstrates it.

Left: a saxy trumpet build in 2010 by Doug Teeter from Fresno, California, early Bundy valves and bell, bore size .460, with left hand brace to get sufficient mouthpiece pressure, for sale on Ebay, October 2011. Right: a sax shaped trumpet sold on Ebay in 2014, the only information being that it has been part of an exhibition for 20 years. The small rings suggest that is was made with parts of a German 'fanfare'.

This instrument was built by J.c. Sherman from Bedford Ohio, about 2008. Much of the the chassis is from a Getzen trumpet. The bell flare is from an Alto Clarinet. The entire leadpipe is a custom piece. The instrument plays best with an English style cornet mouthpiece. J.c. Sherman plays it here. 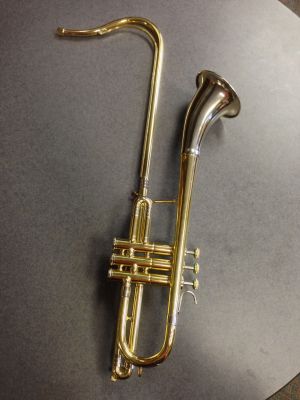 J.c.Sherman also made a Bb Tenor Normaphone. It uses an euphonium or trombone mouthpiece with a small shank. The bore is .562. This instrument was built in 2014 and uses parts from various instruments. The lead pipe is custom-made and there are several other new parts involved. The bell is from a bass clarinet and retains the silverplate inside. The instrument is gold lacquered. The neck is the primary tuning adjustment; there is an additional main tuning slide for minor adjustments. Sherman plays it here.

A sax shaped trumpet sold by Heijo2 from Sipplingen, Germany. No makers name, no other information than that it was used in 'Guggenmusik' for years. 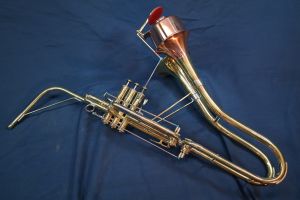 Silver and Brass Music in Carson City, Nevada built this custom made Jazzophone. Parts come from different sources, the valve cluster was from an Olds Ambassador sr.nr. 25557 It has an extra valve to help correct errant intonation, two thumb triggers one actuating this valve and one changing between the two bells. A pinky paddle controls the "wa-wa" effect attached to the muted bell. Tuning is achieved by lengthening and shortening the leadpipe. 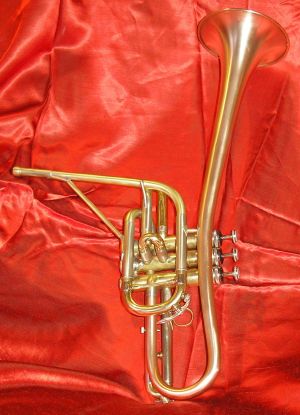 Brian Robson from Nightingale Trumpets in York (UK) created this saxtrumpet, 'to emulate a Normaphone'. 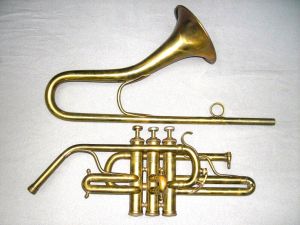 A sax shaped trumpet in Bb, offered on Ebay.de in 2020 by Tollerhecht58. Is goes in two parts. Well made, no marks whatsoever.

Retrieved from ‘https://brasspedia.com/index.php?title=Other_sax_shaped_trumpets&oldid=4256’
This page was last modified on 9 December 2020, at 20:21.
Content is available under Creative Commons Attribution unless otherwise noted.
Privacy policy
About Brasspedia
Disclaimers