Double bell trumpets have a long history, going back to the echo-bell cornets of the 19th century. They're based on the idea that you can change sounds very rapidly with one bell being muted and the other one not. The Jazzophone was a sax shaped reinvention of them. And after WWII a lot of makers experimented with them. Just for fun or on demand. Recently cheap Chinese made double bell trumpets can been found on the market. An overview. And please let me know when you have additions...

The echo-bell cornet was a popular type of instrument in the nineteenth century. The echo-bow was invented by Friedrich Adolf Schmidt (1827-1893) from Cologne who obtained a Prussian patent no. 9960 in 1859. The echo bell, which the 4th valve brings into the windway in place of the normal bell, may originally have been intended as an instantaneous muting device. Before 1900 the echo cornet became quite widely used in Germany, France and England, with soloists performing ingenious pieces with echo effects. In the twenties they were seldom sold because of changes in taste and the upcoming jazz trumpet. Nowadays cheap versions can be obtained from India.

The Musikinstrumenten Museum in Berlin has an echo trumpet, made by Carl Schäfer from Hannover. Besides that this is a trumpet and not a cornet it also has rotary valves, where most of the echo cornets use piston valves. So far it's the first know double bell trumpet.

Another Carl Schaefer echo trumpet is listed in the January 2001 edition of the ITG Journal. This one has an inscription that says it was a gift to Gustav Bernhardt from his loving parents at the occasion of Christmas 1903.

A combination of a flugelhorn and a cornet, dated 1890, was made by the Italian instrument maker and inventor Guiseppe Pelitti in Milano. It is part of the collection of the Metropolitan Museum of Art in New York. It's an instrument in C with rotary valves. Also from Milano but probably from a later date (ca. 1919) comes a flugel/cornet-combination from D(ante) Rancilio, in the HWMC- collection.

Pelitti claimed to be the first to design duplex instruments, combines two different instruments: one with an open, bright, brilliant tone like that of cornet, trumpet and trombone, the other with a dark, smooth, romantic voice, like flicorno, clavicorno or bombardino. 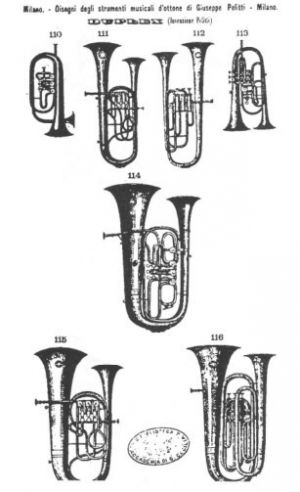 Later, on the occasion of the Paris Universal Exposition of 1878, Pelitti presented a new model of the duplex 'which had the appearance of having only one bell, while the second of them was placed inside the first, and this for greater comfort without in any way altering the sonority of such instrument'. (Catalogo P[remiatoJ R[egio] stab[ilimen] to musicale Giuseppe Pelitti: Milano [Milan, 1880], p.14) An example of such an instrument might be is the following by Gautrot-Marquet.

An unique combination of a trumpet and a flugel (?) with a double bell, one inside the other was offered for sale from Uruguay on Ebay in november 2011. The outer bell measures 7 inches, the length of the instrument is 17 inch (without the missing leadpipe). The bell reads 'Gautrot-Marquet Breveté s.g.d.g. Paris' (breveté s.g.d.g. meaning: patented without governmental garantee). Gautrot was a French manufacturer of musical (brass) instruments and an inventor from the second half of the 19th century. 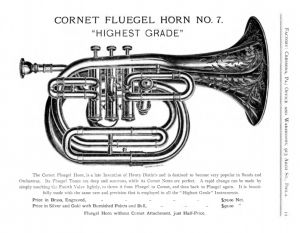 The idea behind this instrument is similar to that of the cornet flugel combination that's found in a Henry Distin catalog dated shortly after 1888. The Henry Distin Manufacturing Co operated in Philadelphia, with a factory in Cressona PA between 1882 and 1887. Distin had been the English agent of Adolphe Sax for some time, worked for J.W. Pepper and Moses Slater and imported French instruments in the US. 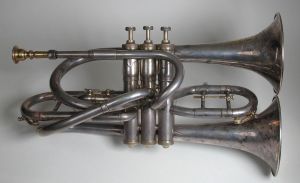 Unlike the echo-cornet where the second bell gives a different sound, the purpose of the second (lower) bell is that it eliminates the small second valve slide. Any valve combination using the second valve, the sound comes out the lower bell, and sounds exactly like the other notes which come from the upper bell. Meredith wanted to make an instrument without any sharp bend or curve, to be played with less exertion, having less friction in the air-passages, creating more volume and more carrying power and a better tone quality.

The patent application was filed January 19, 1901 and granted in 1906, and claims to be applicable for other instruments as well. Nick Decarlis, who owns this cornet, says: "In my opinion, this was a very complicated solution to a non-existent problem!"

Dave Monette is said to have made a double-bell horn for trumpeter Bobby Shew (1941, Albuquerque, New Mexico). He named it Shew Horn with the advice: 'try thinking about your sound more'. Here's a soundclip of Shew playing 'Stompin at the Savoy' on his Shew-Horn, for BBC's 'Pebble Mill at One' in Birmingham, somewhere in the eighties.

Zig Kanstul in Anaheim, California, US designed this double-belled 'Gemini' together with Herb Alpert. It's using a rotary valve to divert the air between the two bells. Here's Herb Alpert playing 'It’s only a paper moon' on it, Oakland, California US 2008.

Trumpeter Herb Smith played on a Jason Harrelson double-bell trumpet at the International Trumpet Guild conference 2009 in Harrisburg, PA, US, the Harrelson Medusa. Jason Harrelson himself shows it here.

Max Thein in Bremen developed in 1975 the double bell trumpet on which Matthias Höfs (left) performs 'Eine Spanische Weihnacht', together with the Berliner Symphoniker.

Another experiment from the Thein Brothers, somewhere between 1971 and 1993.

Julius Edward (Billy) Brooks (1923, Mobile, Alabama - 2003, Amsterdam) performed regularly on his double bell trumpet, de Skoonum-horn. He had it patented in the Netherlands and England since 1965 and in 1970 obtained an US patent and he dreamed of a small factory to make it a sales success. That never happened.

Dominic Calicchio from Los Angeles made in 1973/74 the Skoonum trumpet, now in the HWM-collection, in his workshop in Hollywood, with a brass upper bell. Some 10 years before, in the mid 1960's, he made another experimental double bell instrument for Jack Coleman, that was in the collection of the Fiske Museum. Calicchio also made a double bell trumpet were one of the bells was a Bb trumpet and the other one an Eb trumpet. That one is show in this youtube video.

A self designed - red - double bell trumpet from Marco Blaauw, build in 2000 by Dieter Gärtner, from the company Gärtner und Thul in Düren, Germany. The trumpet uses the standard three valves, plus a fourth and fifth valve. The fourth valve enables one to play quarter-tones over the whole range of the trumpet. The fifth valve is for changing between the two bells, that are made of slighly different material. He used it amongst others for the Peter Eötvös composition Snatches of a Conversation which calls for a double-bell trumpet enabling the soloist to switch quickly between different mutes. Here Marco tells more about the history of this trumpet.

Blaauw also had made a second - blue - trumpet, a few years later, that made it possible to direct one bell backwards.

Canadian Brass trumpeter Brandon Ridenour asked Wayne Tanabe from Yamaha to make him a a double-bell trumpet to perform Snatches of a Conversation with the Los Angeles Philharmonic New Music Ensemble. The instrument was configured from a Yamaha piccolo trumpet (YTR-9835) valve casing, a YTR-9636 Eb trumpet leadpipe, bells from an Artist Model C trumpet and a rotor from a french horn. Ridenour had performed the piece before on the Ben Neill mutantrumpet. 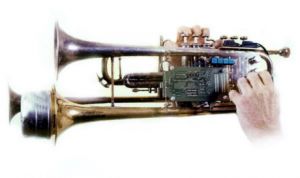 In an Audiokult video Ben demonstrates the possibilities. And here he plays it at Dogwood, a performance space in Beacon, N.Y.

A double bell trumpet by italian manufacturer Romeo Orsi from Milano. Professor Romeo Orsi (1843-1918) was born in Como, joined Paolo Maino's factory and founded the Maino & Orsi company. They have been producing musical instruments since 1836. The factory is currently based in Tradate, Italy.

A cheap Chinese double bell trumpet, designed by Dr. Lee. Pitched in Bb and A (or Bb and C, that's not quite clear) from BerkeleyWind. With a rotary valve that directs the air through the smaller bell, stated to sound like a piccolo trumpet. A Youtube-video demonstrates how the instrument can change from Bb to F by using the fourth valve without the extra bell and how adding a piccolo sized bell changes the sound.

Another cheap double bell trumpet, the 'Schiller Bandleader', offered by Jim Laabs Music in Stevens Point, Wisconsin. The name Schiller suggests it's German but it's understood these are also low end products from Shanghai, China. The address of Schiller Instruments is the address of Laabs.

Schiller also makes a double bell trombone, the valve either working as an F attachment or as a bell toggle.

As a side step, another double bell trombone is played by Bruce Collings from Musikfabrik and it's build by Michael Rath custom trombones in Honley, somewhere between Manchester and Leeds in England. 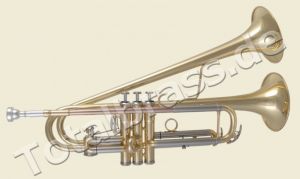 The Tuyama TTR 322 double bell trumpet, offered by Totalbrass.de looks pretty much the same as the Schiller and is also a cheap Chinese made instrument, from the Eastman company. Tuyama was registered as a trademark in Germany in 2009.

Brand is said to be a Taiwanese made brand but again it looks much the same as the above Chinese instruments.

The right bell (with mute) of the project-horn Tim Brown build, is from the original Holton Collegiate trumpet. For the left one Brown, from Galeburg, Illinois, US, used a bell from a private label 'Temple' trumpet. 'Temple' is the name of a music store on the US east coast many years ago. The project-horn of P. van Asselt is made of an Amati and a Yamaha.

A trumpet with a double bell made in 2006 by Michael del Quadro from Del Quadro Custom Trumpets in Wichita, US for Pat Shaner. A rotary valve switches between both bells. Del Quadro used an Olds Ambassador valve block and has put a Pilczuk leadpipe on the front end of the horn. 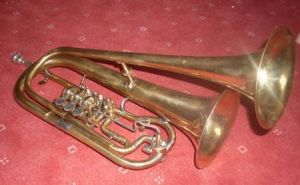 A Melton Egerländer flugelhorn combined with a Benge trumpet bell. An idea from a German player of Donauwörth, made in 2010.

Jason Jimos of Band Instrument Recycler in Minneapolis, MN, in 2013 built a double bell Bb (top bell) and C (lower bell) trumpet, using an old Bb/A Cornet rotor to change the bells. Although his intention was to make both bells Bb, to be able to put different mutes in each bell, the lower bell came out as 'C' due to its length. The valve section and lower bell came from a Besson 2-20 Bb trumpet. There is a 1945 liberty mercury dime soldered on the second slide for a draw knob. The braces are from a Buescher 400. A Harrelson trim kit and finger ring are used on the leadpipe. "I used an unknown baritone finger ring on the 1st slide, cut it and added shrink tubing to make it more ergonomi'", Jason tells. A trombone tuning slide brace between bells gives the horn more durability. "It's a good training tool, since I've never played a "C" trumpet before", he says. "However, it is bulky and a little heavy."

Blessing Artist An interesting variation that was offered on Ebay in 2019 from Northville, Michigan, US. One of the two bells is market E.K. Blessing, Co., Artist Model, Elkhart, Ind. The second bell is unmarked. Measures 25” from tip of bell to tip of bell.

Retrieved from ‘https://brasspedia.com/index.php?title=Other_double_belled_trumpets&oldid=3932’
This page was last modified on 12 January 2020, at 11:04.
Content is available under Creative Commons Attribution unless otherwise noted.
Privacy policy
About Brasspedia
Disclaimers