Difference between revisions of "Normaphone" 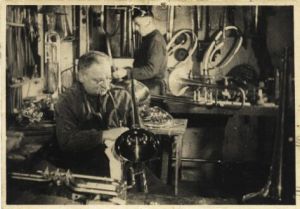 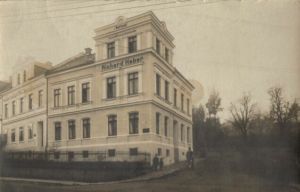 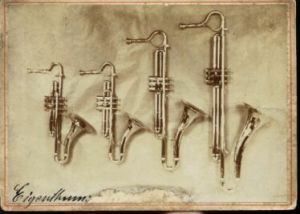 The Normaphon was invented by Richard Oskar Heber (1872-1938). Between 1900 and 1935 he produced brass instruments under the Norma-brand at the Schützenstrasse 36 in Markneukirchen. Heber advertised the Normaphone as very appropriate for 'Jazz-Band und sonstige Effekt-Kapellen'. Roughly 100 Normaphons were built from approximately 1924/25 until 1930, and were distributed through wholesalers such as C.A. Wunderlich in Siebenbrunn, R.O. Adler, Johannes Adler and C.G Glier in Markneukirchen, Ammon Gläser in Erlbach and M. J. Kalashen in New York. The Gebrüder Schuster in Markneukirchen, 'Fabrik und Export von Musikinstrumenten und Saiten', from 1854, had the Normaphone in their Katalog Nr. 70, (ca. 1929). Normaphones were sent out to musical directors all over the world to promote the new instrument.

The C.G.Glier catalog from October 1926 states that patents are claimed both at home and abroad. There were four sizes of the instrument (specials possible), but most of them were build in tenor. Albert Rice explains that they were build not only with piston but also with rotary valves. The National Music Museum in Vermillion SD owns the only known rotary valve example. The soprano also had a version with an echo effect-valve, similar to the Jazzophon. Initially, there also was a choice between high and low pitch.

Max Adler from Erlbach offered in his catalogue number 25 also the English high pitch and the Normaphon in C and in F for the same price. Adler advertises the Normaphon as a solo instrument.

In or after 1931 Robert Oswald Adler still (and only) offered the sopran, alto and tenor Normaphon, as did Johannes Adler in his Liste 31. The 1934 C.A.Wunderlich catalog shows no Normaphons nor Jazzophons anymore.

Pieter Aafjes, from 1907 - 1947 musical director of Crescendo, a concert band in Culemborg, the Netherlands, obtained an alto Normaphon from C.A. Wunderlich with serial number 0104, to give it a try. Through Riet van Dillen, the daughter of his successor Jac van Dillen, it came in my possession.

The National Music Museum of the University of South Dakota has a soprano and two tenor Normaphons, one of them having rotary valves. This last one (serial number 0200), the only example with the usual Normaphon D.R.G.M. Germany engraving with rotary valves known so far, has no distributor name engraved.

Leopold Renz, Instrumentenmacher, Berlin, N58 Gaudystr.14, made this tenor instrument, with a total length of 277 cm. Günter Dullat, who used it for the cover of his book Blasinstrumente names it also a Normaphone and states that the Normaphone (this Normaphon?) in the nineteen twenties was developed by Robert Schopper (1859-1938) in Leipzig. Renz worked as an instrument maker from 19196 onwards, and from 1927 under his own name.

Sofar the only pictures of a Normaphone in an ochestral setting found are those of the Damen Trompeter Korps Rheinland Mecklenburg (thanks to Vaclav Muska).

In the German speaking countries of Europe in the 1890s through to World War I there appeared a large number of “Damen Kapellen”, troupes of entertainers: brass/wind ensembles, string “orchestras”, salon “orchestras”, singing, dancing and theatre variety groups. These largely consisted of women, usually led by a man, and occasionally including males as players. These were professional groups and performed in theatres, as part of larger variety and vaudeville programmes, also at various concert venues in town and countryside.

The female brass ensembles were generally known as “Damen Blasorchester” or “Damen Trompeterkorps” and consisted of a variety of instrumentalists, almost exclusively brass (though some groups did double up on stringed instruments, drums or handbells - for example). In addition to their instrumental playing they would sometimes also sing and dance and go through various costume changes as part of their performances. Fanfare trumpets were a feature of some ensembles.

The music performed ranged from the popular tunes of the day, military marches, and “salon music” to sophisticated arrangements of classical and operatic works. These were written and transcribed by the members, though perhaps more usually by the male “Director” of the ensemble. (I parafrase 'Damen und Damen - Ladies’ professional travelling brass ensembles of the German Empire 1871-1918 by Gavin Holman, 2017, who borrows a lot from Dorothea Kaumann's 'routinierte Trommlerin gesucht' from 1996.)

Ensembles including brass instruments were particularly popular in some environments – e.g. restaurants and outdoor events – where their music could be heard over the background noise. These brass groups had their origins in the military bands of the early 19th century which included woodwind and brass instruments, the brass being increasingly dominant as the instruments evolved, using piston valves and more efficient manufacturing techniques. The relatively low cost, ease of learning and playing of the brass instruments, made them eminently suitable for the new women’s ensembles (as also for the village and town bands). Indeed, many of these groups maintained the links to the earlier bands by adopting costumes modelled on military uniforms. Other costumes were based on traditional folklore dress and more normal female attire of the day.

It was not until the 1890s that the numbers of women’s groups increased significantly. Each city had at least one group resident or as part of a touring company, in Dresden alone, there were up to ten Damen Kapellen of various types regularly performing after 1900. They took advantage of the economic prosperity around the turn of the century, the popularity of theatres and vaudeville shows, the demand from large restaurants, bars and exhibitions for entertainers, and the easing of the labour market for women. Their engagements generally lasted from two weeks to several months, depending on the venue and tour commitments of the ensembles, moving on to the next town for their new contract, even beyond the traditional German speaking countries.

An analysis by Dorothea Kaufmann from adverts in “Der Artist” (a German version of “The Stage” or “Variety”) shows an increase in the numbers of Damen Kapellen from 43 in 1894, peaking at 299 in 1913, then declining sharply in the early 1920s, running around 30 or so until WW2. The groups averaged seven to eight females and up to two or three males. After WW1 the groups tended to reduce in numbers to three/four female and perhaps one male on average. The decline of these bands after WWI might be one of the reasons why the Normaphon and the Jazzophone didn't gain a market.

In 1956 Karl Linsenmeijer, then 16 years old, entered the Musikverein Offnadingen (a small village near Freiburg, Germany) and played an alto Normaphon untill he changed to clarinet in 1965. He played it together with Karl Schleer, who changed to flugelhorn. The Musikverein had severe losses during WWII, having only 5 active members left in 1945. The Normaphon was bought because at the time the money was very tight and sometimes even two musicians had only one instrument, so Jürgen Schleer, now chairman and son of Karl. Where it was bought is not known, after 1965 it went to a music store. In the orchestra the Normaphon was counted as a flugelhorn, the notes were always rewritten by the conductor, mostly from the tenor horn. "The exotic Normaphon has always been a highlight and an eye-catcher at every party and every performance', says Jürgen.

William 'Hicky' Kelley played a Normaphone (probably an alto) in 1959 and 1960 with the Modern Jazz Disciples on two records, 'The modern jazz disciples' and 'right down front'. Kelley (March 12, 1929 Cincinnati - May 9, 1998 Cincinnati) started his musical career on the trumpet and later picked up the Normaphone. The notes to the original first album of the Modern Jazz Disciples state that Kelley would like it made clear that that his use of the Normaphon (and the euphonium on one track) is "not one of novelty. He is dedicated to their use as jazz pieces. He has no desire to become an 'avant-courier' for them in the field of jazz." Here's Kelley on the Normaphone in Disciples Blues (as of 4.50") (and here's more about this piece).

Multi instrumentalist Scott Robinson from Teaneck, New Jersey, played a tenor Normaphon on his first LP Multiple Instruments from 1984 and in later years with Hazmat Modine on their CD Bahamut.

Tom Guralnick has a tenor Normaphon (serial number 0238) that he got from Bob Klein in New York around 2001. Bob's father played in the NY Philharmonic and taught in a community music school where he discovered it some 50 years ago when he closed down the music school, and Bob gave it to Tom some 15 years ago. Tom is the director at Outpost, Albuquerque, and occasionally shows the instrument to guest musicians. 'Rosewell Rudd dug it". Here's jazz trumpeter Bobby Bradford (1934) trying, with Tom looking.

Legendary Prague trumpeter and cornettist Luboš 'Bob Zajíček (6-10-1938) and his quintet performed on December 18th, 2013 at ...., with Bob (center) on a soprano Normaphone, ... on Violinophone and .. on a Jazzophone, probably pitched in Eb. Bob Zajíček also hosts a programm called JAZZOFON on radio station Vltava. Zajíček and his friends, playing what's now called traditional jazz, are keeping alive a tradition of which the Jazzophon is the ultimate icon.

Here's an overview of the Normaphones I detected so far. Please let me know when you know of others. Serial numbers range from 0104 till 0441, suggesting that there might have been a few hundred of them. I didn't manage to find another Heber instrument with a serial number yet, to see if he used these numbers for all his instruments or for the Normaphones exclusively.