There are serial number lists of Keilwerth saxophones around but there was no such thing for their brass instruments. Below you'll find a list of instruments and numbers that were traded through Ebay, Quoka and such, with information added from sites like Trompetenforum.de (where Brigantiumjazz triggered me to make this list), Trumpetherald.com, Trumpetmaster.com, Horn-u-copia and the Yorkmaster public pictures at Yahoo. There seems to be no relation whatsoever between the serial numbers of Keilwerth saxophones and their brass instrument serial numbers.

Here's a graph that illustrates the development of Keilwerth serial numbers in the list below. Steady going from zero till 30.000 and then a few high scores. 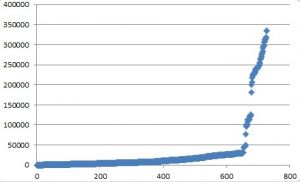 For some instrument there is a more or less reliable date of purchase know. Based on these dates the graph below is made. Note that an instrument bought at a certain time may have waited in the shop for a considerable amount of time, sometimes several years. So drawing a line between the lower dots gives an approximation of the timeline of the production of Keilwerth brass, that is the first 30.000 Keilwerth instruments, which I believe is their own production. 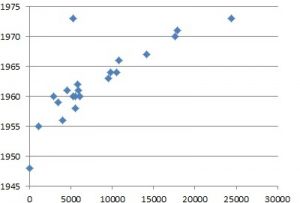 There also are Keilwerth brass instruments without a serial number but with the valves numbered. The trumpets without a serial number mostly have an additional bow in the main tuning slide, a feature that's seen more often on pre-war trumpets. Therefore I think these are the first Keilwerth brass instruments, before the serial numbers started. Trombones also seem to be missing a serial number quite often. There are also serials in the lower range that begin with a zero. These seem to be a separate line (most Toneking model) where (most of the) the De Luxe models are without the zero.

For additions and corrections: please contact me. Information about the year your instrument was acquired is very helpful. Thanks to everyone who has contributed to this list so far!

Retrieved from ‘https://brasspedia.com/index.php?title=Julius_Keilwerth_brass_serial_numbers&oldid=3751’
This page was last modified on 13 October 2019, at 11:14.
Content is available under Creative Commons Attribution unless otherwise noted.
Privacy policy
About Brasspedia
Disclaimers