From Brasspedia
Revision as of 17:29, 8 July 2019 by Gwesterhof (talk | contribs) (Created page with "==Johan Sattler, Graslitz, Czechoslovakia== Johann Sattler was a brass instrument maker in Graslitz. He was born in 1878. In 1904 he established his workshop, around 1938 he...")
(diff) ← Older revision | Latest revision (diff) | Newer revision → (diff)
Jump to:navigation, search

Johann Sattler was a brass instrument maker in Graslitz. He was born in 1878. In 1904 he established his workshop, around 1938 he was still located at the address Silberbacherstrasse 23. In 1914 Sattler served in the Austrian Hungarian Army (the 6th Landsturm Regiment, a reserve force consisting of men aged 34 to 55). On the list of expelled people in 1946 only Julie (61) and Franzeska (26) are mentioned at this address. According to his granddaughter Johann died before the end of WWII. He was also active in the trade of musical instruments and strings. 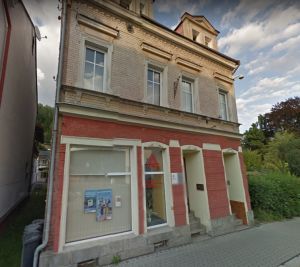 The location of workshop at Silberbachestrasse 23 in 2014

Johann Sattler patented a trumpet with push-rods enclosed in metal tubes in Czechoslovakia, on November 1st, 1935, no. CZ 6296 - 35. He also patented this invention in the US (US 2,106,281 by Johann Sattler of Bohemia, Czechoslovakia), filed on August 15th, 1936 and approved on January 25th,1938. In his patent he claims that opening the valves only requires a very small movement of the plungers and therefore his invention permits quicker tone variations.

On September 22th 2018 the granddaughter of Johann Sattler showed in a broadcast of the Bavarian BR a Sattler JAZZMASTER which according to her was his masterpiece. It has blue and pearl valve tops and similar caps and extensive multi coloured art deco engravings. It was dated around 1910 by the experts on duty. Which would be in line with the then age of Sattler, but not with the use of the Jazzmaster name, because the use of the word jazz started later....

At an auction in Vichy (France) in 2007 a Sattler, Graslitz JAZZ MASTER trumpet was sold with similar blue and pearl valve tops. In november 2015 Jan Vundr ('Brass maniac') also sold a Jazzmaster that looked identical to the Sattlers, but with no other engravings than Jazzmaster (and without blue and pearls valve tops).

Practically identical is a trumpet marked Star Supertone with a 'K' in an art deco engraving. The bell rim mentions the Sattler U.S. and Č.S.R patents, on the reciever is 'Made in Czechoslovakia' engraved and a serial number 137. The valve caps have a blue star inlay in mother of pearl like the Sattler masterpiece above. Supertone was one of the tradenames used by Sears for their musical instruments, but the combination Star Supertone along with the K in the logo is unique sofar. Because of this K, my hypothesis is that the instrument might have been made by Sattler and sold by V. Kohlert and Sons from Graslitz, who is known to have made other 'Star' instruments for the American market, and sold in the US through Sears. But that's only a wild guess.

This instrument was sold in 2012 by Felicity Blastland, Swansea, UK, who got it in 1981 from a friend. His father, captain E.J. (Eric) Farmery, had owned it. Farmery was born in the late 1920’s and came from Selby in Yorkshire, UK. He was a jazz enthusiast and loved playing it. It's unclear where he picked up the horn, in the 1950's he was posted in Stuttgart, India and Singapore, so it probably went out there with him. The Edinburgh museum has an instrument without a makers name but on the bell the Czech CZ 6296-35 and US 2,106,281 patents engraved and also the Made in Czechoslovakia on the reciever ferrule, with serial number 130. The picture is mirrored.

Johann Sattler also made a one-valve one. Missing the valve cap and inscribed Patent applied for U.S. Patent Office. It is 22" long and the bell is approximately 4 3/8" diameter.

Sattler marketed his invention not only in the U.S. The model is found with both the name Julian Kielbich, an instrument trader from the Polish town of Bydgoszcz and Johann Sattler, Graslitz engraved. Bydgoszcz is a city in the northwest of Poland. It was German and named Bromberg until 1920 and during WWII. This trumpet says P.A. 6296, which I believe means 'Patent angefragt' (patent pending), referring to the Czech patent that was granted in 1935.

Sattler applied the same patent to the tuba, of which an example is in the Hartenberger World Music Collection. 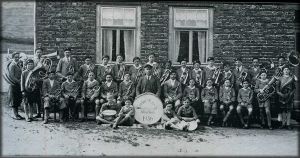 Here's a picture of the Musikschule Johann Sattler (Raschpl), in the Pächer-Wirtshaus, in Hof, Graslitz, 1936. Not sure if it's the same Johann Sattler....

There are very few instruments known of Sattler. This is a rotary valve trumpet.