Difference between revisions of "Johann Sattler"

Johann Sattler was a brass instrument maker in Graslitz. He was born in Graslitz in 1878, his father being Anton Sattler. In his workbook he is described as big, blue eyes, catholic (like most of the Graslitz people).

Johann started at the age of 13 as a pupil at J.B. Gessner (Silberbacherstrasse 728, Graslitz, founded in 1870 by Johann Baptist Gessner). He worked there from August 15th 1891 till November 1st 1896. Then he went for two years and 5 months to Christian Reisser Instrumentenfabrik in Ulm, Germany, till March 6th 1899. From December 2nd 1902 - May 30 1907 he's enlisted again at J.B. Gessner. And from June 9th 1907 - June 30th 1910 we find him at Franz Michl, Graslitz. All these dates were confirmed by the Genossenschaft der Instrumentenmacher Graslitz on August 17th 2010, after his last period with Franz Michl. According to Gunther Dullat he established his own workshop in 1904, which seems a bit strange considering the above dates. In 1912 he is mentioned in the Almanac of the Austrian Clergy as supplier of the reverend clergy, along with J.B.Gessner, Franz Michl and 14 other musical instrument makers from Graslitz.

ad in almanac of the Austrian catholic clergy 1912

From a certain point he had his workshop at the address Silberbacherstrasse 23. He was also active in the trade of musical instruments and strings. 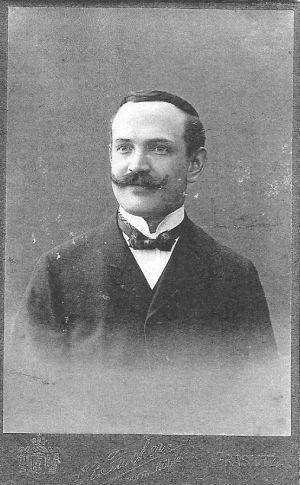 The location of the workshop at Silberbacherstrasse 23 in 2014

In 1914 Sattler served in the Austrian Hungarian Army (the 6th Landsturm Regiment, a reserve force consisting of men aged 34 to 55).

Johann Sattler patented an instrument with push-rods enclosed in metal tubes in Czechoslovakia, on November 1st, 1935, no. CZ 6296 - 35. He also patented this invention in the US (US 2,106,281 by Johann Sattler of Bohemia, Czechoslovakia), filed on August 15th, 1936 and approved on January 25th,1938. In his patent he claims that opening the valves only requires a very small movement of the plungers and therefore his invention permits quicker tone variations.

On September 22th 2018 the granddaughter of Johann Sattler showed in a broadcast of the Bavarian BR a Sattler JAZZMASTER which according to her was his masterpiece. It has blue and pearl valve tops and similar caps and extensive multi coloured art deco engravings. The rimless bell has gold wash inside. It was dated around 1910 by the experts on duty. Which would be in line with the age of Sattler by then and his period as a pupil, but not with the use of the Jazzmaster name, because the use of the word jazz really started later....

Through his granddaughter, Waltraud Greipl, I got parts of a correspondence between Johann Sattler and his contacts in the US about the patent process. In the first letter, dated Februar 14th 1936, Franz Zoubeck, living in Baltimore but originating from Graslitz, reports about his enquiries at the US Patent Office in Washington D.C. He askes for pictures of the patented instrument (front view, sideview) and a written proxy to be able to proceed. Zoubeck was a musical instrument maker who had left Czechoslovakia in 1921 at the age of 24 on a boat from Bremen and settled down in Baltimore, where he named himself Frank and made and repaired musical instruments. In April he writes to Sattler that he has found someone to market the instruments, a mr. A. Quall. Qual was store manager of Aaron Burdwise in Baltimore, a musical instrument dealer and the former supervisor of Zoubeck. Quall is then president of the International Sales Company, Inc. Importers, Manufacturer's Agents and Exporters of Musical Merchandise. According to Zoubeck he has connections with the big Graslitz companies like A.K. Hüttl, F.X.Hüller, Köstler and such. Quall thinks that if the patent works he can sell some 200 trumpets per month. Sattler would have to deliver them for $8 net, to be payed at delivery.

In the next letter Zoubeck explains that Sattler needs to send a copie of the patent from the Czechoslovakian patent office and a declaration that he is the owner, signed by the American Consulate. As fast as possible, Zoubeck believes that is per Zeppelin. In June he sends Sattler the paperwork from the Patent Office, to fill in, sign and send back. He urges him to react fast, 'so that not more time is lost' Zoubeck believes that Quall can provide Sattler with tremendous orders, "That could bring you financially back up", he says. Obviously Sattler has financial problems and he is hesitating. That becomes even more clear when in a later letter Sattler asks for advance payment to be able to buy machinery. He refuses to accept the deal that Quall offers him. Zoubeck replies that there is no alternative. The construction Sattler wants, is forbidden and new rules restrict the import further... Sattler in the meantime goes to Prague to try to get the necessary papers from the Czechoslovakian patent office. There he is told that his 'patent' is not in effect yet! The patent number turns out to be only an application number. And he is told that his invention is not new! There's a patent from 1921 that should describe the same. But, so Sattler "until now there's not an instrument seen of that". He restarts the Czech patent procedure. In the meantime the American Consul accepts the paperwork for the US application even though his patent in Czechoslovakia is not accepted het.

Sattler makes clear to Zoubeck that he needs at least $2000 deposit from Quall to start and to buy machinery. If Quall doens't want to accept this, Sattler asks Zoubeck to sell the patent as such, as fast as he can. He emphasizes that with his invention the annoyance of sticky valves disappears completely. In August 1936 the patent is finally filed. In March 1937, half a year later, Mr Quall/International Sales Company writes a letter to Sattler with a lot of complaints about the quality and prices of slide trombones and cornets (branded Ambassador) Sattler has sent. But he also gets a new (small) order for these instruments, and for 6 'Sattler-trumpets' at a price of $7 each.

Then in a letter to Zoubeck of December 1937 Sattler is very worried. He hasn't heard anything from Quall since a long time, no new orders, bills totalling 10.000 Czech Krones still have to be paid, shipping documents are sent back because the American Bank says that the client cannot be found. Sattler in the meantime has found another company to help him in the US, Quall will be dismissed if he ever pops up again. One month later his patent is approved in the US.

Other Sattler Jazzmasters have engravings on the bell that are similar to the Bavarian masterpiece. This Jazzmaster has the US patent number on the backside of the bell, which dates it to 1938 (or later...)

At an auction in Vichy (France) in 2007 a Johann Sattler, Graslitz JAZZ MASTER trumpet was sold with similar blue and pearl valve tops. In november 2015 Jan Vundr ('Brass maniac') offered a Jazzmaster for sale, with no other engravings than Jazzmaster (and without blue and pearl valve tops). But the bell engravings are again similar to the Bavarian one.

Then there is another Jazzmaster that was acquired in Czechia 2021 by Vaclav Muska. It has the US patent number and was originally sold by Rud. Blaha, a musical instrument shop in Zlín. Thi instrument has apart from theblue and pearl valve inlays also blue paint decoration on the bell and an extra valve to tune it to A.

Other Sattler tarv trumpets don't have the Jazzmaster name. They are as far as I could find all from the 'US patent pending' period, so before 1938.

Joshua Wagner made two video's with his Sattler, playing Up Jumped Spring and The Magic Trumpet.

Johann Sattler, for sale at Dillon Woodbridge NJ in 2011

The Edinburgh museum has an instrument without a makers name but on the bell the Czech CZ 6296-35 and US 2,106,281 patent numbers engraved and also Made in Czechoslovakia on the reciever ferrule, with serial number 130. The picture is mirrored.

Practically identical to the Sattler tarv trumpet is a trumpet marked Star Supertone with a 'K' in an art deco engraving. The bell rim mentions the Sattler U.S. and Č.S.R patents, on the reciever is 'Made in Czechoslovakia' engraved and a serial number 137. The valve caps have a blue star inlay in mother of pearl like the Sattler masterpiece above. Supertone was one of the tradenames used by Sears for their musical instruments, but the combination Star Supertone along with the K in the logo is unique sofar. Because of this K, my hypothesis is that the instrument might have been made by Sattler, maybe sold through V. Kohlert and Sons from Graslitz, who is known to have made other 'Star' instruments for the American market, and sold in the US through Sears. But that's only a wild guess.

I acquired this instrument in 2011, it was once owned by a captain who was born in the late 1920’s and came from Selby in Yorkshire, UK. He was a jazz enthusiast and loved playing it. It's unclear where he picked up the horn, in the 1950's he was posted in Stuttgart, India and Singapore, so it probably went out there with him.

Sattler marketed his invention not only in the U.S. The tarv model is found with both the name Julian Kielbich, an instrument trader from the Polish town of Bydgoszcz and Johann Sattler, Graslitz engraved. Bydgoszcz is a city in the northwest of Poland. It was German and named Bromberg until 1920 and during WWII. This trumpet says P.A. 6296, which I believe means 'Patent angefragt' (patent pending), referring to the Czech patent that was granted in 1935.

There are just a very few other instruments known of Sattler. This is a rotary valve trumpet, marked Joh.Sattler, Graslitz:

Johann Sattler died on November 13th 1944, aged 66. The company was shut down after the death of Johann because his son and the other worker both were drafted into the German army. Before that Sattler had 10 people at work and a bookkeeper. They all had to go into the army. His inheritance was divided between his widow Julie and the children Franz, Berta, Marie and Franziska. Franz was instrument maker and the intended successor, he inherited the workshop tools, three old lathes, three workbenches and the smaller tools. Total value by then: RM 2.200. Julie and the children divided the rest of the inheritance, RM 8.100 and RM 200 clothes and linen. Sadly Franz, who was in the army as Stabsgefreiter (a specialist rank) in Beroun near Prague, fell at the end of the war. 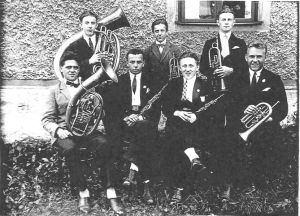 On the certificate of inheritance, dated March 9th 1945, Julie, Berta and Franziska are registered at the adress Graslitz 23, the Silberbacherstrasse, although Berta is married to professor (Anton?) Ernstberger. Marie is living/working as a hostess at 5.kvetna 316 in Graslitz (now restaurace ČERVENÝ MLÝN). (the other son Gerhard died in the war earlier).

On the list of expelled people in 1946 Julie (61) and Franzeska (26) are mentioned at this address and also Berta (35) with a note that her husband is in captivity. Marie (32) also is expelled with her child Ulrike aged 2, still living at nr 316. They al go to Bavaria.

A document with an inventory of the damage of the expulsion (Vertriebungsschäden) gives some more information about the Johann Sattler workshop. Workshop, packing room, warehouse, soldering room and office were located in the Silberbachstrasse 23. The building is said to be constructed in 1929. The inventories consisted of the usual equipment of a wind instrument production facility including special machines, brass tubes, brass sheets, musical instruments, finished and semi-finished products / trombones, trumpets, basses, zithers, etc., in a value of approximately RM 8,000 - 10.000. There were no debts. The annual sales were not determinable anymore because the Amati coöperative also had claimed the paperwork and balance sheets. But some 40% consisted of export orders to the USA, Spain, Poland, Balkan and other states.