The Saxie is a sax shaped instrument with a 62 centimeter u-bend brass tube and bell and a reed mouthpiece. The inventor and patent holder of the instrument was Frederick B. Hammam of Baltimore, Maryland, the US-patent dating from June 3rd, 1924.

The Couesnon company in Paris must have quickly bought the patent rights as their name is on all the now known extant Saxies. Under the reference to the US patent is written Bte SGDG, an abbreviation of Breveté Sans Garantie du Gouvernement. SGDG was a French patent system, where the government didn't accept liability.

It was described to the 'ever-widening circle of admirers of the saxophone' as 'the little brother of the saxophone', but easier to play. A Method for the Couesnon Saxie was published by Simson & Frey, New York 1924. The small number of Saxies shows that it was an interesting experiment but not a commercial success. The Saxie is described in detail in The Galpin Society Journal from April 1999: A Six-Finger Hole Saxophone: The Saxie. At the time the author, David Rycroft, was aware of four Saxies apart from his own, two in private collections and two in a museum. One of them is in the Edinburgh Musical Instrument Museum At least four more popped up on Ebay in recent years, the one I acquired was sold by a designer from Oakland, California, who found it years ago at an estate sale in Berkeley.

A 1938 catalog from Ernst Hess Nachf. Klingenthal (Germany) lists a saxie with a forward facing bell to, albeit slightly different. Hess also offers a straight saxie, but doesn't refer to Couesnon.

The Saxie owned by Pete Thomas is branded Couesnon and also has a more forward looking bell, but a bit different from the Hess one. 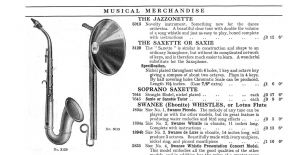 Retrieved from ‘https://brasspedia.com/index.php?title=Couesnon_Saxie&oldid=2992’
This page was last modified on 30 August 2019, at 11:48.
Content is available under Creative Commons Attribution unless otherwise noted.
Privacy policy
About Brasspedia
Disclaimers